Thrilled that my poem, "A Banjo Strums Itself to Sleep," is published in the poetry journal Spillway's "Muse & Music" edition alongside so many of my favorite poets, including: Norman Dubie, Jane Hirshfield, Cornelius Eady, Richard Krawiec, Eleanor Wilner and many more! Thank you Susan Terris! 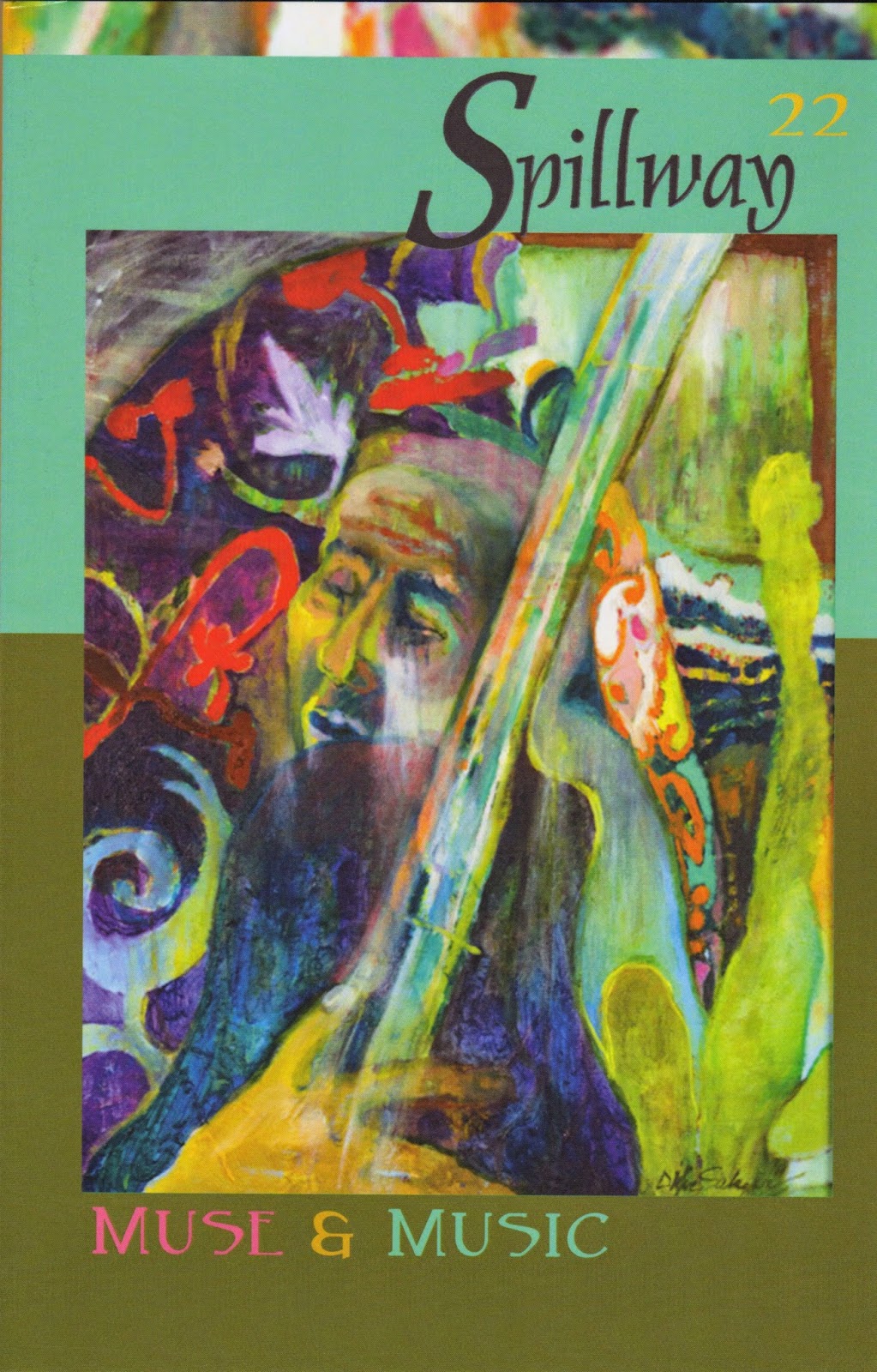 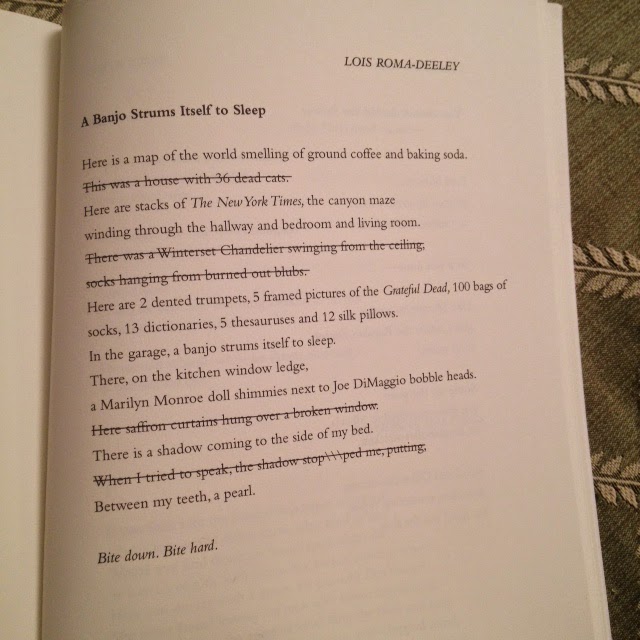 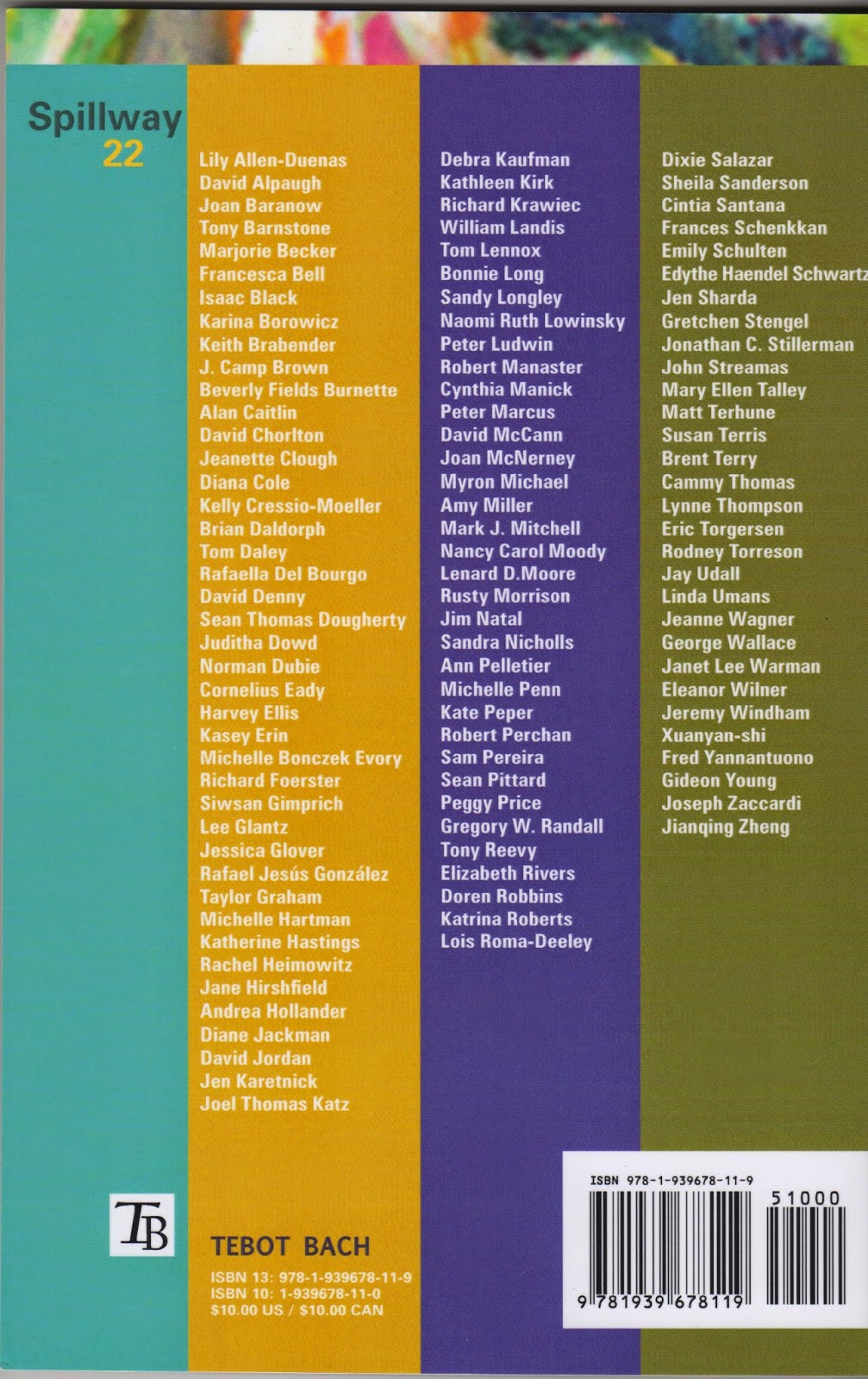 Posted by Lois Roma-Deeley at 7:19 AM No comments:

I am honored and thrilled that my college has created a creative writing scholarship in my name! 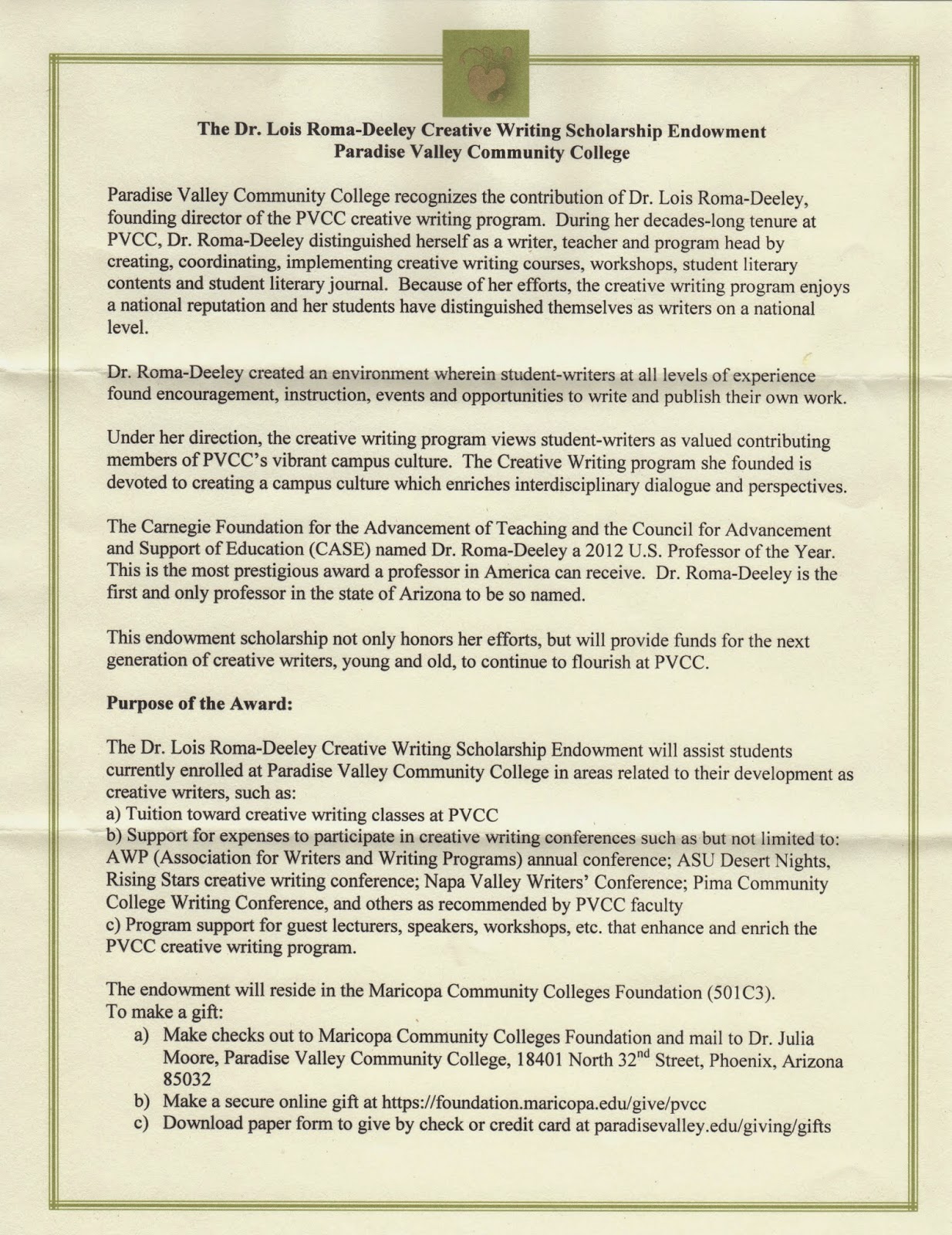 Poem in Spring 2014 and/or journal 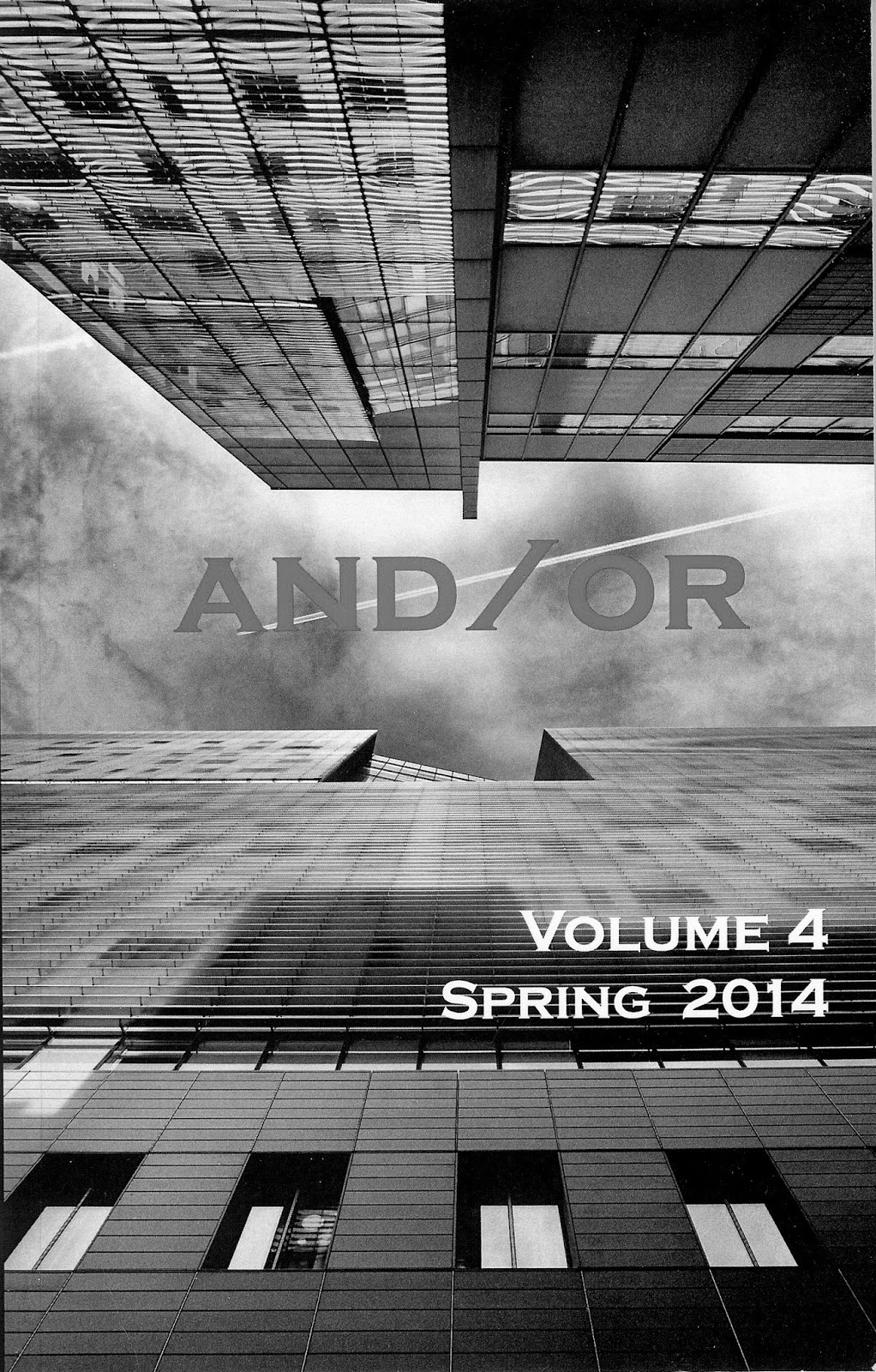 Excited to see my poem "Me and J. Alfred in the 21st Century" published in the Spring 2014 edition of and/or!

and/or is an international print journal devoted to publishing experimental creative writing and graphic art by writers and artists from around the world. and/or publishes one volume per year and follows a double-blind editorial process for all submissions.
http://www.and-or.org/

Posted by Lois Roma-Deeley at 11:37 AM No comments:

You have heard it all before: No one reads anymore, buys books anymore, supports small presses anymore. Fiction is taking a beating from crass consumerism and poetry has been bludgeoned to death by a stylized ennui that has no patience for long sentences like this one.  Plays are either musicals or revivals of musicals. Anyone untalented can publish anything bad at any time in any format so no one has time to find the good writing.  The whole culture of American literature is in one sorry state.  Why should you—why should anyone—bother to write at all?

I am here to tell you that your poetry/short stories/essays/plays/novels—whatever your creative writing genre happens to be—matters. That your contribution to making the culture of our time matters. That your devotion to the craft of writing and your efforts to sit down and write with considered purpose and focus, or as Lucille Clifton has said, with major intent, matters.

I can say all this to you with some impunity because I have witnessed firsthand how the power of language—despite the protestations of all the cynics and the naysayers—moves audiences and readers in profound ways.

In 2012 I was nominated for U.S Professor of the Year, an awards program sponsored by the Carnegie Foundation for the Advancement of Teaching and the Council for Advancement and Support of Education (CASE). Of the award, The Chronicle of Higher Education writes: “The honor is the nation’s most prestigious teaching award.”

However, as a poet and a community college professor who teaches creative writing and women’s studies, I was certain I would never win such an award. I was certain I would not win—not because I was insecure or doubted my abilities as a poet and teacher, but precisely because I believed these abilities were at best misunderstood and, at worst, completely disregarded by most of America.

I only completed the application for the award because the very earnest and very sweet student who nominated me insisted that I do so. She sat in my office with her moon-eyes and her Tinkerbell-sweet voice insisting that I simply had to fill out the application which, as it turned out, wound up taking me 20-plus hours to complete.  I simply did not have the heart to tell her no.

And even as she thrust the application material into my hand, I told her yet one more time that I was not going to win. “Poets don’t win these kinds of awards, Carolyn. Please don’t be disappointed when I don’t win. I’m not going to win.”

But she was right and I was wrong. I did win.

In fact, I am the first national winner of this award that Arizona has ever had in any category.  As a national winner, I was asked to give a speech at the National Press Club in Washington, D.C. to an audience that included the U.S. Under Secretary of Education as well as college presidents and chancellors, deans and professors from all over the country.

Indeed, during the last few years I’ve had other successes, awards and honors, all of which have given me opportunities I would never have imagined possible when I was first starting out as a serious writer.

I have been invited to give poetry readings, speeches and workshops to audiences across the country, and I have seen the cultural cynics proved wrong many times over.  As I look into the faces of strangers whose eyes seem to lock onto mine with an intensity I find both humbling and scary, I have learned—rather I have re-learned—that language used with “major intent” is still a powerful, transforming force. People tell me they are moved by my words. People tell me they have been changed. People tell me the words matter.

So, to all of you who are sitting down today to write with major intent, know that your efforts—though solitary and so often fraught with frustration, longing and despair—matter.  Know that there may be one person or whole rooms of strangers who need and want to hear what you have to say. It matters to them the work you do.

It matters.
Posted by Lois Roma-Deeley at 11:45 AM No comments: