"Arguing With Angels" --Shadur and Roma-Deeley--Image and Word 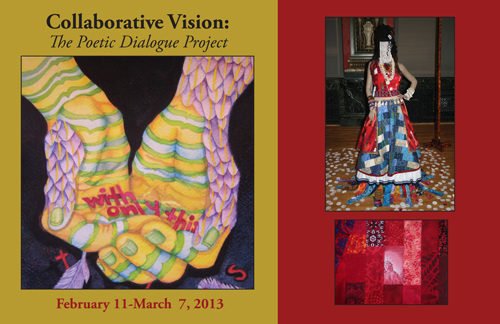 Chicago Heights, IL on February 11, 2013. The artwork underneath the title of the exhibition material was created by the project's curator Beth Shadur. The words "with only this," which are sitting in the cupped hands,   are  from my poem "Arguing With Angels," published in my third collection of poems High Notes. Beth and I are collaborators, colleagues and great friends. I have had the great fortune of curating the poetry for the Poetic Dialogue projects and working with Beth for 10 years. My poem is printed below. There is a statement from Beth Shadur about the current project below that.

It is the August thunder storms that speak
for me. The voices from outside of time
will press their lips to both my cheeks and weep,
What do you want? "Just give me what is mine,"
I say to threads of silver dust that cling
to shaking window shades. What will you have?
How can they answer blood and bone? Nothing
to say? the dancing echoes spin and laugh
at me. I may not own the heart that pumps
uncertainly within or lets it go; but what comes
through yellow rooms to open me is cold.
It drinks the rain; it asks, "How will you live?"
I make my hands a cup: with only this.


About the Exhibit
Curator's Statement

Our February exhibition features selections from Collaborative Vision: The Poetic Dialogue Project, curated by Chicago artist Beth Shadur, which was the third exhibition in the ongoing Poetic Dialogue Project of collaboration between contemporary artists and poets, creating new works of art by responding to the muse of each other's works in a creative dialogue. This project came about after a wonderful meeting of hearts and minds in 2004 at the Ragdale Foundation* between Arizona poet Lois Roma-Deeley and Shadur, as both explored the parallel creative process of artist and poet in an ongoing dialogue, and began to collaborate in their own work. The previous two exhibitions, one in 2004, in which twenty-one Chicago area visual artists responded to the poetry of six national poets, and a second exhibition in 2005, where works of visual art themselves become the muse for each poet in works of 'ekphrasis', premiered in Chicago at ARC Gallery, the second oldest women's cooperative in the nation, where Shadur served as Executive Director at the time. These shows then traveled nationally, became part of the 2004 and 2005 Chicago Humanities Festivals, were included in the International Conference on Arts in Society in Edinburgh, Scotland in 2006, and the Project was published in the International Journal of Arts in Society in Melbourne, Australia.

In the 2009 exhibition, premiering at the Chicago Cultural Center, Shadur paired thirty-one visual artists with thirty one poets based on the resonance of their works. In this exhibition, artist and poet were asked to develop a creative collaboration in whatever direction they chose as a pair, to create a new work of art. The collaborative process was defined by each pair in a unique way. Some pairs met in person to collaborate, while others worked through the internet to send images and poetry back and forth. Others created an ongoing spoken dialogue. Works were developed to integrate text with visual images in a wide variety of ways, from dialoguing and using the poet's voice, such as in the work of Beth Shadur and Lois Roma-Deeley, to physically making the work as a team, as illustrated by the collaborative installation of LaShawnda Crowe Storm and M. Eliza Hamilton Abegunde that exemplifies and honors the collaborative nature of African American quilting. Poets mentioned experimenting and working outside their own comfort zone to create new ideas and forms for their work, while artists who had never considered text as part of their work found ways to integrate the poet's voice. The ongoing dialogue offered each creator the opportunity to witness and effect the creation of "the other", respond, communicate, argue, compromise, and sometimes, to change or overcome difficulties. In making collaborative work, each individual brought his or her strength to the paired collaboration, allowing each contribution to be weighed and valued, given critical consideration, as the pair moved to develop solutions to the creative process as a team. In some cases, the collaborative effort was exciting and inspirational, in others problematic. Some pairs mentioned difficult struggles in working with a person who was a stranger; and yet struggle, too, is part of the creative process. All pairs found that the collaborative process in creativity became a catalyst for new directions, new forms and new paradigms in their process and practice.


Collaborative Vision: The Poetic Dialogue Project was an exhilarating exhibition to curate, as Shadur offered the unique opportunity to each creator to venture forward in challenging their established practice by working with a partner. Some pairs have moved ahead to extend their collaboration in future works, (such as poet Cynthia Hogue's  book Or Consequence (Red Hen Press 2010), which will feature artist Mirjana Ugrinov's work on the cover) Pairs such as artist Granite Amit and poet Jan Beatty have now collaborated on works for years, since paired in the original exhibition. What originated from Shadur and Roma-Deeley's early conversations at the Ragdale Foundation, in the warm yellow light of the kitchen overlooking the Illinois prairie has developed in ways beyond the wildest dreams of the pair, who have now collaborated for five years. The most recent exhibition, Collaborative Vision: The Poetic Dialogue Project, has taken the project in its most exciting direction, that involved sixty-two imaginative individuals in a truly collaborative unfolding of creativity; and all artists and poets involved have expressed their delight in participating in this collaborative process. The works seen here a selection of works from that exhibition.


* the Ragdale Foundation is an artists colony where visual artists, writers and musicians convene to live and work, away from the distractions of their daily lives

Posted by Lois Roma-Deeley at 9:06 AM No comments: