The feisty small press has just published an anthology of Italian-American Poetry which spans the last 100 years. Critics are praising the new book as "dazzling," "remarkable," "superb" and "a work of great beauty."

New Hungers for Old is a remarkable achievement. Individually evocative and collectively superb, the poems illuminate an immense variety of Italian American voices and experiences. Yet they also extend well beyond the scope of a single ethnic category. This is that rare, thoughtful anthology for all readers wishing to reflect on the treasures and tragedies of the universal human condition." —Chandra Prasad, author of On Borrowed Wings: A Novel and editor of Mixed: An Anthology of Short Fiction on the Multiracial
http://www.starcloudpress.com/NewHungersForOld.html

"Dennis Barone has produced a book of great beauty and importance that should be read by anyone who cares about American as well as Italian American writing. It offers a cornucopia of remarkable poems by generations of Italian American poets whose work mirrors the evolution of American forms from realism through postmodernism. Including famous and emerging younger talents, New Hungers for Old underscores a distinctive intersection of heritage and the larger culture in the flavor of its innovations. The dazzling variety of poems share an infatuation with life itself --- the gifts and pleasures it bestows, the harsh toll it exacts, the rebellions it provokes and the revelations of spirit that erupt from felt experience. It is a landmark collection that is essential reading." —Josephine G. Hendin, Professor of English and Tiro A Segno Professor of Italian American Studies, New York University

Dennis Barone is a Professor of English at Saint Joseph College in West Hartford, Connecticut. He is the author of five books of short fiction. In 2011 Quale Press published his new book of stories: Field Report. He is also the author of two novellas, Temple of the Rat (Left Hand Books, 2000) and God’s Whisper (Spuyten Duyvil, 2005), and the author of a collection of prose poems, The Walls of Circumstance (Avec Books, 2004). Bordighera Press published his study of Italian-American narrative America / Trattabili in 2011. Barone is co-editor with James Finnegan of Visiting Wallace: Poems Inspired by the Life and Work of Wallace Stevens (University of Iowa Press, 2009) and editor of Beyond the Red Notebook: Essays on Paul Auster (University of Pennsylvania Press, 1995). Left Hand Books published his selected poems volume one, Separate Objects, in 1998, and Shearsman Books published volume two entitled Parallel Lines in 2011. He is currently editing the anthology Connecticut Poetry: From the American Revolution to the Present (Wesleyan University Press) and in 2011 Star Cloud Press published the anthology he edited entitled New Hungers for Old: One-Hundred Years of Italian-American Poetry. A graduate of Bard College, he received his Ph.D. in American Civilization from the University of Pennsylvania. In 1992 he held the Thomas Jefferson Chair, a distinguished Fulbright lecturing award, in the Netherlands, and in 1997 he received the America Award for fiction.
Posted by Lois Roma-Deeley at 10:03 AM No comments:

"Public art," states the website of visual artists, Mags Harries and Lajos Héderze,"is a lot more than placing large objects in public, it can reach every aspect of the environment and real its poetic possibilities. In all of our work we make art which shapes community places, creates community rituals, makes public places resonate with history, memory, and imagined possibilities. The completed projects presented on this web site take diverse forms but they all share these intentions and a highly site-specific approach." http://www.harriesheder.com/

The new public art project, of which I have the honor of being selected as one of the featured poets, is titled Passage which can be found at South Mountain Community Library in the Phoenix area of Arizona. One of the features of the work consists of what I term "poetry chairs"--large, solid structures which, when a person sits in it, recites poetry! Below please find additional information taken from the artist's website. http://www.harriesheder.com/projects/streets-walks-and-plazas-2/passage/ 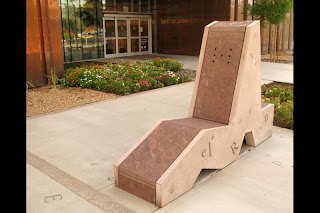 "Passage is a multi-faceted, collaborative public artwork.  The South Mountain Community Library is operated jointly by the Phoenix Public Library and South Mountain Community College.  Used by students and the community at large, the Library is a magnet for community identity and the spirit of learning.  To reflect this energy, we wanted to integrate visual elements with words.  With the help of noted local poet, Alberto Ríos, we focused with poetry onto the South Mountain landscape,  the quality of words, and the contents of the Library.  The project consists of four Poetry Trellises and three Acoustic Chairs.

Acoustic Chairs
The three Acoustic Chairs are grouped in front of the Library’s main entrance.  They extend the architecture of the Library into the landscape, relating to South Mountain.  The seat surface of the Chairs is made of local Hualapai stone. The sides of the Chairs are made of colored concrete with steel letters cast into the surface.   Letters are also embedded into the surrounding pavement, as though cascading from the Chairs.  Each letter of the alphabet is represented in the jumble as well as the letters that make words that reference the landscape such as “desert,” “stone,” “mountain,” and “water”.  The scattered letters encourage visitors to make their own words and poetry.

Speakers inside the Chairs play recordings of poetry when activated by  motion sensors.  The poems play softly to create an intimate experience.  Ríos curated the collection of poems, featuring 19 poets writing about South Phoenix and the landscape of the area." 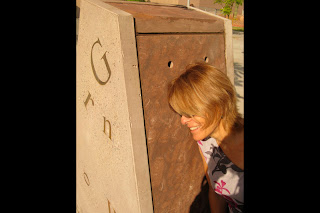 Posted by Lois Roma-Deeley at 8:53 AM No comments: